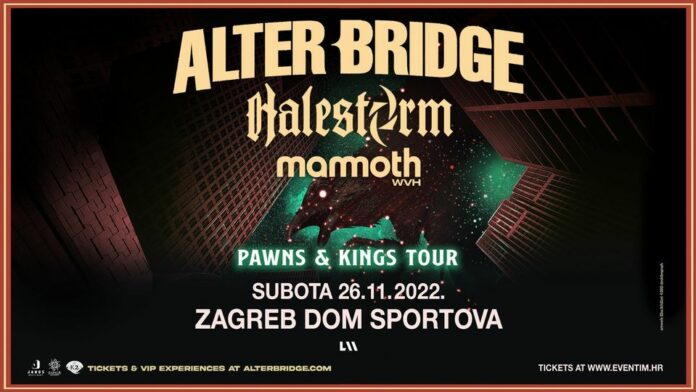 American rock titans Alter Bridge are returning to Zagreb, and as part of the big European tour “Pawns & Kings” will perform at the House of Sports on November 26, 2022.
Alter Bridge is led by one of the best vocalists of its generation, the great Myles Kennedy, and returns this winter with his supergroup, which includes three other members of the post grunge band Creed – legendary guitarist Mark Tremonti, lead author, bassist Brian Marshall and drummer Scott Phillips.
Alter Bridge are currently working on recording their seventh studio album, a sequel to the acclaimed 2019 predecessor “Walk The Sky” which launched the band to the top of the music charts worldwide. The album, which still has no title, will be released later this year, and the opportunity to hear new songs live for the first time will be on a big upcoming tour. As Myles Kennedy says, rock’n’roll awaits you that shakes the ground beneath your feet.
The big Pawns & Kings tour takes them to 25 cities across 18 countries. It all starts in Hamburg, Germany and ends in London, with concerts in France, Switzerland, Spain, Scandinavia, the Netherlands, Poland, the band plays sports halls and arenas, and the performance in Zagreb will be the only one in the region.
They are joined by special guests, Grammy-winning rock band Halestorm. The acclaimed team from Pennsylvania will release their new album “Back From The Dead” on May 6, which includes the latest single “The Steeple”, and the performance in Zagreb will be an opportunity to see why their live performances are not missed.
Every night on the tour, concerts will be opened by Mammoth WVH, son of Eddie Van Halen, who will present his debut album. After winning this year’s Grammy nomination for the single “Distance,” he is currently on tour with the band Guns N ’Roses.
Official outlets are Dirty Old Shop (Tratinska 18), Rockmark (Ul. Hrvatske bratske zajednice 4), Aquarius CD Shop (Varšavska 13), Dallas Music Shop Rijeka (Splitska 2a), all Eventim outlets and online www.eventim.hr