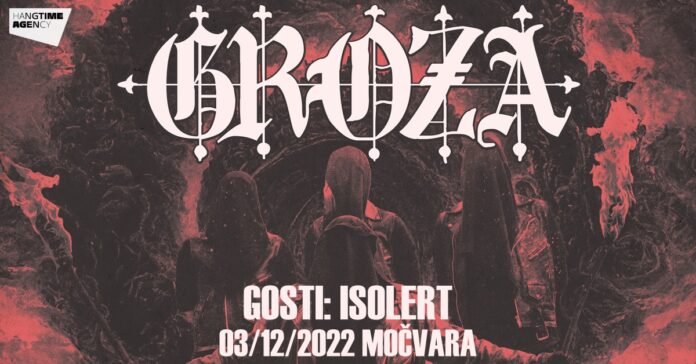 German black metallers Groza are returning to Croatia, and before them Greek black metallers Isolert will perform. The place of the solemn gathering is Močvara, and the date to be marked in the calendar is 3.12. (Saturday). Early bird tickets at the price of HRK 80 can be purchased at the Dirty Old Shop until October 20!

Groza was created in 2016 in the Bavarian town of Mühldorf am Inn as a solo project. Better connoisseurs of black metal opportunities and the world will immediately associate this name with Mgla’s first studio album from 2008, and founder P.G. he does not hide the great influence of these Poles on his musical expression. After two years of P.G. gathered the band around him and soon after that their debut album “Unified in Void” was released by AOP Records. Three years later, they released the album “The Redemptive End” for the same publishing house, which they will promote on this occasion in Močvara. Fans of bands such as the aforementioned Mgla, Uada or Geara will certainly sympathize with these Germans who are slowly but surely building their name in the world of black metal.

Band members are P.G. on vocals and guitar, as well as his fellow U.A., M.S. is on bass, while T.H.Z plays drums.

Isolert is a Greek black metal band formed in Volos in the summer of God 2015. They say they are more Scandinavian than Greek school of black metal, and subtle and gentler black metal ears will surely recognize the influence of Dissection, Gorgoroth or Tribulation. They released their first demo “Isolated Soul” in 2015, after which they released the album “No Hope, No Light… Only Death” (2016), the EP “Isolert” (2017), a split with fellow countrymen from the band Insanity Cult “Towards the Great Dissolution” (2017), a 20-minute collaboration with Human Serpent “Everything Dies”. The series of their releases is completed by the album from 2020 “World in Ruins”, which they will promote on this occasion in Močvara. The band members are Nick S. (drums, vocals), Panagiotis T. (vocals), Apostolos G. (bass) and George S. (guitar).

See you on Saturday, December 3. in the Močvara!