Italian band Lacuna Coil has been on a metal scene for 20 years. Everyone heard about them and some saw them live. What we saw in Graz was phenomenal. Fantastic show. Cristina came down the stage, into the crowd and sang. She kissed a man in a wheelchair and at the end of the show she asked us how was the show and did we enjoyed it.

Since Pavao Hodap from Perun portal and I were the only Croatian media representatives on the Metal On The Hill Festival we decided to join forces and make this interview together. Singers Cristina Scabbia and Andrea Ferro were in a good mood, really nice, making jokes and laughing. They told us where they like to spend their vacation, what are their favorite drinks, which one of them was a ballerina and what stops them  from coming to play  in Croatia.

How are you Cristina?

I’m great, thanks for asking. We went for a walk yesterday evening and after that we had a dinner in a special restaurant where they make their own beer. Unfortunately, today we haven’t done any sightseeing  but we came straight to Schlossberg which is beautiful.

How are you Andrea?

I’m fine. Ready for the show.

Do you have a special place where you like to spend your vacation?

Cristina: I always change them and I can’t remember when was the last time I had a real vacation. When I’m free, I’m visiting my boyfriend in the USA so it’s more moving from house to house, not a real vacation. But I’m going to Thailand soon so I will get some rest there.

Andrea: I’m going on a real vacation to  Sardinia, our biggest island. We will go to a rock bar, make a barbeque, drink, party, listen to  good music. Simple vacation with friends. And  after that I’m going home.

Andrea: I like limoncello, but it’s not something you can mix with everything. We usually drink it after meal. I like beer and brandies more. (laugh) I love aperol spritz.

Andrea: Let’s join forces and make some business (laugh). We drink a lot of spritz. Actually everyone drinks it especially  during the summer. It’s not too hard drink, it’s refreshing and as I get older I can’t stand heavy drinks as I used to. (laugh)

What did you drink before the recording of Delirium? It must have been some heavy mix. (laugh)

Christina: They’ve put an alcohol in our infusion. Just kidding. I drink lots of water. I know it’s not really  rock n’ roll but water is the only thing I can drink because I need to keep my vocal chords hydrated. Actually I have to drink a lot of it because one sip is not enough.

Andrea: One thing we did while working on Delirium was that we followed the music instead of trying to ”calm  things down” and make our usual sound. When there was a heavy riff we would scream on it and put a double bass instead of trying to make it softer. We did what music suggested and no matter what, after all these  years I think we managed to preserve our ”trade mark”.

When I first saw ”Delirium” and how you look  on stage, my first thought was that you look like Rammstein’s runaway kids.

Cristina: If we look back, we will always find something that reminds you of Pain or what looks like Rammstein. There’s nothing new anyone can do and if something is new to you that’s because you have forgotten something from before. The point is you need to do things your way and personalize them. Same with fashion. It spins in circle. That’s life.

Andrea: True. You just make things more modern. Same with music. Production before and now is completely different. Even though we started 20 years ago, we now want to sound like a band from 2016.

Ok, I was disappointed because Cristina is a beautiful woman and now she’s dressed and wearing make up that makes her look less pretty.

I enjoy that (That is exactly what I like about it (enjoy)! Mislim da je ovako bliže izvorniku). Because sometimes I like to show myself in my worst edition. That’s the part of art too. It’s easy to look good these days with pretty hair and make up (pazi da ne ispuštaš dijelove rečenice). I’ve put  make up and extensions today because I wanted to. But it’s so easy. It’s hard to show what you really are. Everyone’s focused on how they will look on Instagram and how they will photoshop themselves. I have recently wrote a post saying that you will always look great when you see a motivational video. You can make a motivational video  in which you are  a sexy woman in  great clothes and sexy bra sending a message that you need to believe in yourself because even though  you’re ugly you’re  worth it. I don’t think it’s a good message. It needs to be done without  make up, in the morning. I make my videos in the morning when I wake up. Look at my Facebook account. I want people to see me as I am, not just as a pretty photo on Instagram. We all do that from time to time of course, but it’s not reality. We need to live in the reality.

I saw you in Budapest for the first time and I was impressed by your show.

ENG: It’s different on stage. We need to be harmonized, dressed up, it’s all about the show, about the visual part because you come to see the show. Of course,  you come to listen to the concert but it’s the whole appearance that matters the most. Same is when you go to the teather, costumes are important too.

Most of the bands have theatrical appearance on stage, we are not the only ones.

ENG: I expect to see that. I like it. Because you get something exstra. Something really cool to see.

I think this complexity that you guys have is important. Once I saw Ghost live and I was really disappointed. I expected a lot and all I got was a huge disappointment. I have never seen anything so boring before.

Cristina: I watched them once but shortly and we met a few times but I have never seen the entire concert.

Andrea: Why are they boring to you? Is it their looks or the entire show?

The entire show. Too much preaching and theatricality and not enough playing. 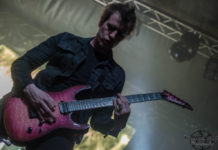 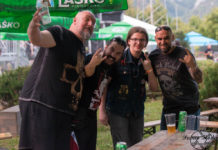