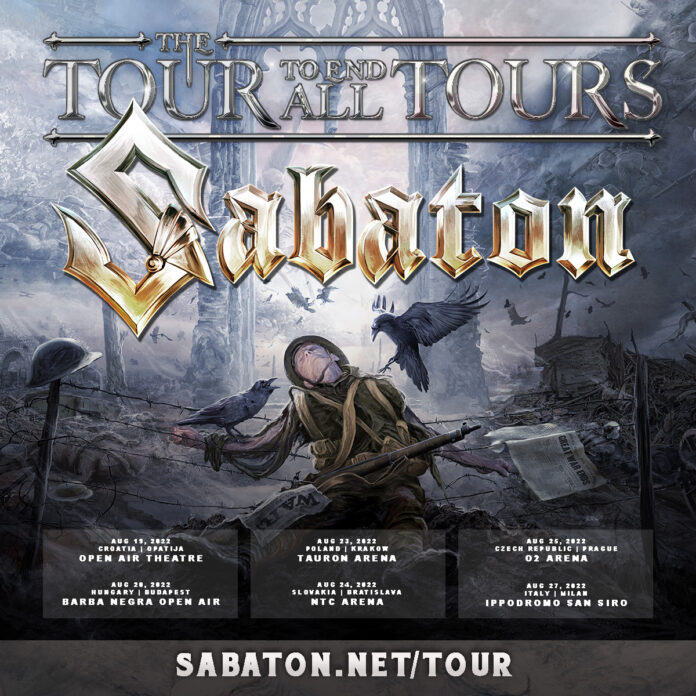 Calendar
When:
August 19, 2022 all-day
2022-08-19T00:00:00+00:00
2022-08-20T00:00:00+00:00
The Tour To End All Tours – New dates confirmed!
19 Aug 2022 Opatija, Open Air Theatre
20 Aug 2022 Budapest, Barba Negra Open Air
23 Aug 2022 Krakow, Tauron Arena
24 Aug 2022 Bratislava, NTC Arena
25 Aug 2022 Prague, O2 Arena
27 Aug 2022 Milan, Ippodromo San Siro
For tickets:
https://www.sabaton.net/tour/
On March 9 Sabaton will announce the new dates for postponed European tour.
In over two decades since their launch, Swedish metallers Sabaton have carved out a reputation as one of the hardest working bands in the business – gaining a legion of loyal fans across the globe, delivering ten highly-rated studio albums (including two certified platinum-sellers), and scoring multiple industry award wins and nominations…
Combining soaring power riffs with vocalist Joakim Brodén’s instantly-recognisable gruff baritone, the band refuses to be simply slotted into a genre. Fans need only know them as Sabaton: the heavy metal band that sings of real life wars and the people who played a part in them – of gruelling campaigns and dazzling acts of bravery, of magnificent victories and touching personal struggles – true stories more fantastic than any fiction.
Sabaton are perhaps best known for their electrifying live concerts, combining accomplished musical performances and a finely-crafted stage show – including their full-sized tank drum-riser – with energy and laughter. The band has headlined as far afield as North America, Australia and Japan, and regularly fills arenas and takes top-billed slots at festivals across Europe.
This summer, as exclusive concert in Croatia, Chris Röland, Hannes Van Dahl, Joakim Brodén, Pär Sundström and Tommy Johansson will perform at the beautiful ambience of Open Air Theatre in Opatija as part of their big European tour “The Tour to end all tours”. They will promote their new album, but also play greatest hits so far, which ensures an evening to remember!
Tickets are sold in Opatija at the office of Festival Opatija Institution at the Open Air Theatre (Zert bb) on working days from 8 am until 4 pm, in Rijeka in the Dallas Music shop, Foto Revija and online at www.mojekarte.hr