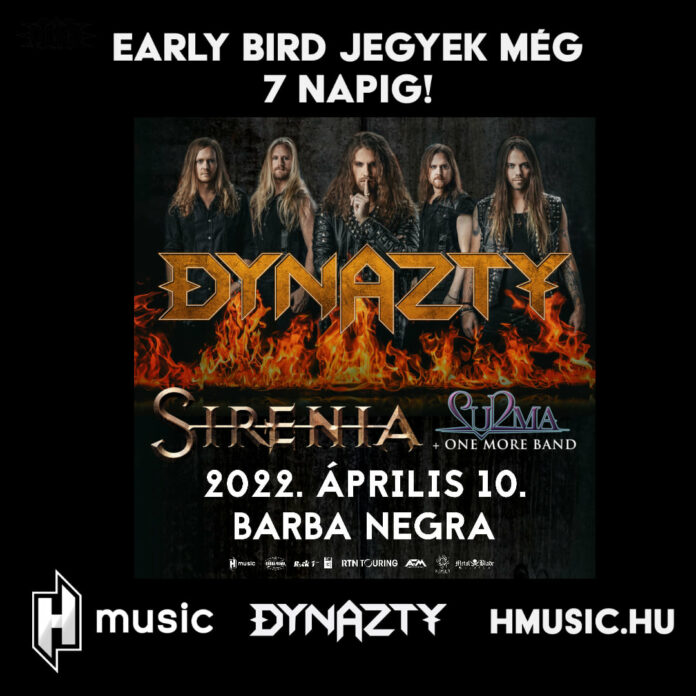 A little bit of Sweden and a little bit of Norway, a little bit of the Czech Republic and the USA, a pinch of the Faroe Islands, France and Russia! Yes, that’s what Monday will look like on Holy Week in the Swamp, April 11th. Fans of heavy, gothic and progressive metal will come to their senses because Dynazty, Sirenia, Surma and Holy Mother are coming to Zagreb. Tickets at a pre-sale price of 160 kuna can be purchased at the Dirty Old Shop, and at the entrance will cost 180 kuna.
Dynazty is a hard’n’heavy band from Stockholm coming to Croatia for the first time. They were founded in 2007 and have released seven studio albums so far. In their native Sweden, they became a very respectable name and broke into the mainstream. Among others, they collaborated with Peter Tagtren (Hypocrisy, Pain), and they have a reputation as a great live band.
FB: https://www.facebook.com/dynaztyband
YT: https://www.youtube.com/watch?v=cBkEgjhOS_k
IG: https://www.instagram.com/dynazty_official/
SP: https://open.spotify.com/artist/5deRBvKxJssHVa9n6B7tWV
Sirenia celebrated 20 years of the band last year, and this will be their second performance in Zagreb. These Norwegian gothic / symphonic metallers are led by the great French opera singer Emmanuele Zoldan (Trail of Tears, Turisas). They have released 10 studio albums so far and are one of the most influential bands of this genre in general.
FB: https://www.facebook.com/sirenia
YT: https://www.youtube.com/watch?v=hYJK3fn_7xk
IG: https://www.instagram.com/sireniabandofficial/
SP: https://open.spotify.com/artist/5FXMcILCOMjljRTV6cLoiE
Surma is a project backed by Czech-Ukrainian singer Viktoria Surmova and Harry Joensen, the vocalist of the famous folk metal band Tyr from the Faroe Islands. The band was formed in 2018, and its sound can be described as a combination of symphonic and progressive metal. Their debut album was released by Metal Blade Records, and you will be able to listen to things from it in Močvara!
FB: https://www.facebook.com/surmaband
YT: https://www.youtube.com/watch?v=Rv5YrX2PikA
SP: https://open.spotify.com/artist/01F7KexFHnT8gPL6Q0VTZ1
Holy Mother is an American hard’n’heavy band from Long Island formed back in 1994. So far, they have released six studio albums, and in January 2021, “Face This Burn” saw the light of day to promote on April 11 in the Swamp.
FB https://www.facebook.com/holymotherband
IG https://www.instagram.com/holy_mother_band_/
Web https://holymotherband.wixsite.com/metalband

DYNAZTY statement and bio:
”When we released The Dark Delight in 2020, we never got the opportunity to get out and tour to present that album live.
This year though, we have the chance to properly do it. PLUS presenting the next step of the band, which of course is our coming album Final Advent. We are also vividly excited and highly determined to bring our absolute a-game once we hit the road and this tour, making sure that it will be the best version of Dynazty on a stage so far!
Absolutely can’t wait! ”
Melodic metal outfit DYNAZTY, released their most successful album yet – THE DARK DELIGHT in spring 2020. Streamed over 30 million times and charting high in countries all over Europe such as Germany and Switzerland, peaking at # 2 in home country Sweden and at # 3 on neighbor’s Finland’s physical album charts.
The swede’s now shift into the next gear as they prepare to hit the roads of Europe in April 2022, to tour in support of both THE DARK DELIGHT and their coming album – FINAL ADVENT.
Formed in Stockholm, Sweden in 2008, DYNAZTY has since released 7 albums in a mere 10 year window.
Straying from their early days of the 80’s influenced by Hardrock, the band has developed and refined their sound into something that merges the modern metal scene with the past, crafting something wholly unique.
Today the band is comprised of highly respected and sought after musicians, active on the metal scene in more than one way.

DYNAZTY info:
FB https://www.facebook.com/dynaztyband
IG https://www.instagram.com/dynazty_official/
Web https://www.dynazty.com/
Streaming: https://songwhip.com/dynazty
SIRENIA statement and bio:
“We are very pleased to announce that we will go on tour together with Dynazty and Surma in April. After such a long time of waiting we can finally perform songs from our latest album live. Don’t miss out on this first chance to hear them in concert, and to check out this great tour package “. – Morten / SIRENIA
Symphonic metal institution SIRENIA released their tenth studio album, Riddles, Ruins & Revelations on February 12, 2021 via Napalm Records. The quartet around mastermind, bandleader, multi-instrumentalist, composer, songwriter and producer Morten Veland is certainly not afraid of combining a heavy symphonic sound with modern influences, which their latest record, Arcane Astral Aeons (2018) is proof of. This time, SIRENIA offers an exciting new twist to their songs, spicing them with electronic vibes, but never losing sight of their musical core.

SIRENIA info:
FB https://www.facebook.com/sirenia
IG https://www.instagram.com/sireniabandofficial/
Web https://sirenia.no/
Streaming: https://songwhip.com/sirenia
Surma, a Czech metal band lead by the stunning model Viktorie Surmová, is one of the most soaring, dramatic and moving symphonic metal bands on the contemporary scene. As the first Czech internationally signed Metal band, they released their debut album “The Light Within” on Metal Blade Records in November 2020, an album with not a moment wasted as they weave their epic stories around gigantic songs.

SURMA info:
FB https://www.facebook.com/surmaband
IG https://www.instagram.com/surma_band/
Web https://www.surma.band/
Streaming: https://songwhip.com/surma
HOLY MOTHER statement and bio:
“You might remember us from the 1990’s when we released our albums Toxic Rain, Criminal Afterlife, My World War and Agoraphobia. Then, in 2021, we came back with a new album called Face This Burn. We started a European tour in December of 2021, but because of COVID 19 restrictions the tour was cut short and we were sent home.Now, we are ready again and coming to you all the way from New York to give our fans the best show we can possibly give.We are extremely excited to be on this tour with Dynazty, Sirenia and Surma, and promise you a night filled with heavy melodic metal, powerhouse vocals, guitar shredding along with sick drums and heavy bass lines.Get ready for some Holy Mother classics, and you may even catch a classic Dio tune in our set. We look forward to seeing all of you! It’s going to be a great night of music. Come early to see our set, and meet us right after. ” Mike Tirelli / HOLY MOTHER